This class will look at the history of women mystic artists spanning the Medieval period to the 20th century through the lens of three different themes: Ritual, Healing, and Channeling. In varying ways, each artist’s work is the record of a conversation with forces larger than themselves. Each artist collaborates with and conceives of Mystery in unique ways: for Hildegard of Bingen it was the animating force of the natural world she named Viriditas, for Georgiana Houghton it was the spirits from the other side whom she channeled, and for Ithell Colquhoun, the process of painting itself was an act of divination that connected her to spiritual forces within and without. Each artist also shared a lifelong engagement with the co-creative process of opening oneself as a channel to the unknown.

Mysticism in art — especially by women — has often been minimized, ignored, or rejected by dominant art historical narratives, and so this class seeks to foreground each artist’s relationship with mysticism as important to their lives and their works. We will chart how these artists, through their engaging and complex works, reject the pervasive contemporary notion that mystical artwork cannot also be intellectually, politically, and socially engaged.

Ritual
We will look at artists whose approach to art-making involved ritual, whether as a means to create the artwork or as an end in and of itself. These artists drew on practices rooted in specific traditions of ritual magic, invented their own personal practices, or often some combinations of the two. Artists covered include Pamela Coleman Smith, Ithell Colquhoun, Remedios Varo, Leonora Carrington, Ana Mendieta, and Betye Saar.

Healing
We will look to artists whose artworks were made either to help to facilitate healing for themselves, to directly heal others, or to engage with the therapeutic potential for healing in artwork generally. Artists covered include Emma Kunz, Nikki de Saint Phalle, Rosie Lee Tompkins, and Guo Fengyi.

Channeling
We will look at artists whose approach to art-making was fueled by a co-creative practice with the divine, whose visionary works were created through channeling. We will study their varying approaches (seances, mediumship, meditation, and more) to gain a better understanding of how their artworks emerged in co-creation with the numinous forces that shaped their work. Artists covered include Hildegard von Bingen, Herrad of Landsburg, Christine de Pizan, Georgiana Houghton, Hilma af Klint, and Agnes Pelton.

Natalie Labriola is a visual artist, astrologer and tarot reader in Los Angeles, CA. She created Talis in 2017 as a clothing line for psychic protection inspired by her study of the occult, apotropaic magic, and astrology. In addition to clothing for psychic protection, Talis is now a hub for all her offerings, including tarot and astrology readings, artworks created as spells to accompany readings, and talismanic clothing. She received her MFA in Sculpture from Bard College in 2015.

Image Credit:
Illustration from Christine de Pizan’s The Book of the City of Ladies, 1405

10/23/21 FESTOONING WITH POSSIBILITY:WHat Honeybees Can Teach Us About Building Better Worlds with Ang Roell *ZOOM CLASS 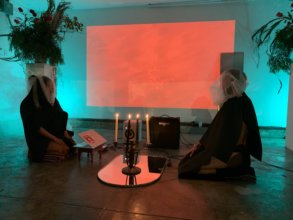